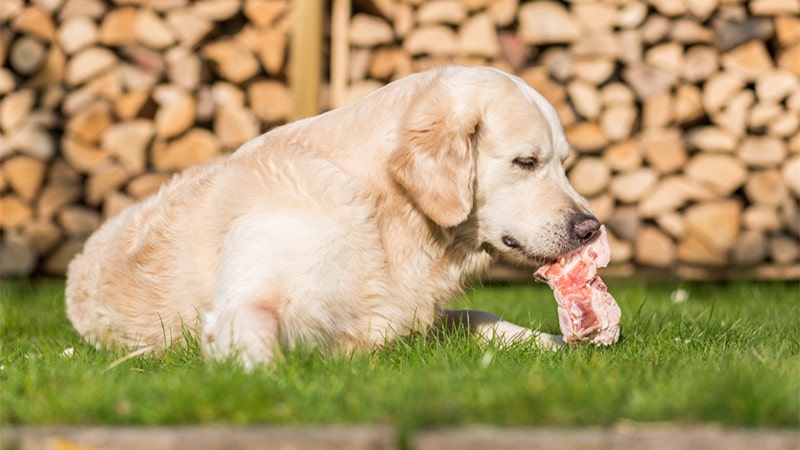 If you’re anything like most dog owners, you only want the best for your pup. Apart from constant hugs and kisses and regular walks, your puppy deserves proper nutrition, too. So, squeaky bones aside, which food is safe for your dog? Can dogs eat raw meat, or is that a no-no when it comes to dog parenting?

Especially if you’re new to this, you might need a dog-feeding guru. Luckily, we’re here to debunk the common misconceptions regarding raw meat and man’s best friend. 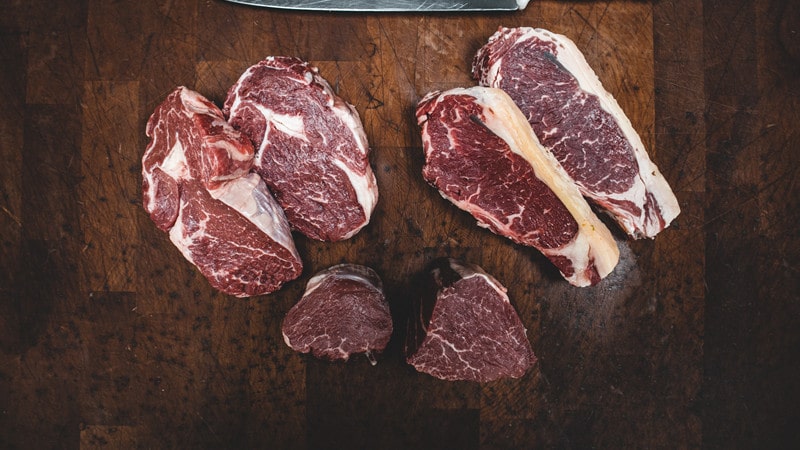 The fact that you’re inquiring about raw meat diets for dogs can mean only one thing — you’ve heard about the myths. Thanks to many faulty theories, you’re now wondering whether your dog would turn into an aggressive beast after eating raw meat. Also, would this kind of diet put your dog at a higher risk of catching diseases? And what about the overall nutritional value of such a diet?

The thing is, you needn’t worry too much about any of these misconceptions. As you’re about to see, your dog will be more than fine eating raw meat. This kind of diet will provide your good boy with enough nutrients and won’t pose a threat to your pup’s health. Also, your dog’s behavior won’t change for the worse — it might even improve.

Why Can Dogs Eat Raw Meat? 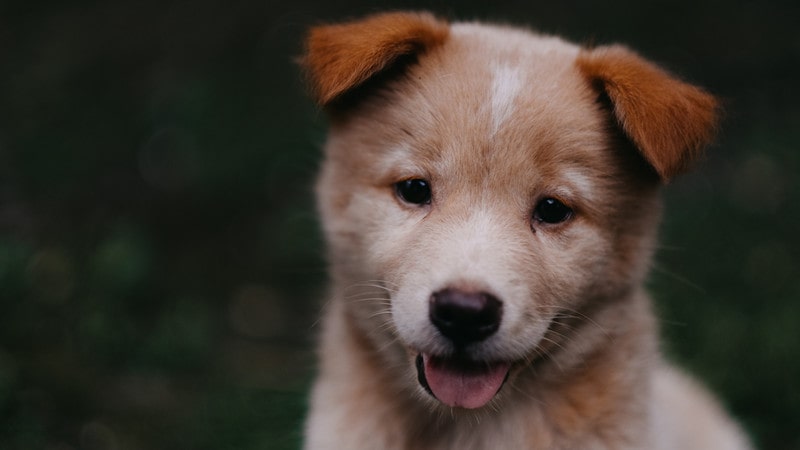 Now that you know your dog can eat raw meat, let’s see why the theories claiming otherwise have got it all wrong. For starters, your pup won’t be at risk of catching salmonella after eating raw meat. That’s because a dog’s digestive system isn’t the same as that of humans. Dogs have digestive enzymes and highly acidic stomachs that help them process all the bacteria they end up taking in.

Also, feeding your dog raw meat won’t disrupt its otherwise rich diet. Quite the contrary, this will prove even more beneficial to your dog’s health. That’s because raw meat diets are, in fact, more nutritious than cooked meat. But stay tuned because we’ll cover this part in further detail in a bit.

Finally, as carnivores, dogs are already biologically programmed to feed on raw meat. Sure, they might not have the same level of prey drive as cats, but they’re still natural predators.

Nevertheless, eating raw meat won’t make your dog any more aggressive than it already is by nature. That’s because no food (not even raw meat) has the ability to turn an obedient puppy into a bloodthirsty killer.

What Raw Meat Can Dogs Eat? 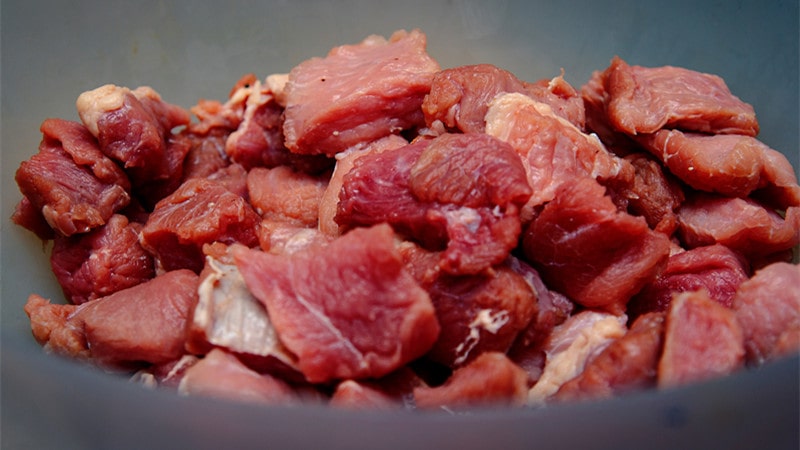 When providing your dog with a raw diet, you need to consider the two existing diet options. The first one is a milder alternative that implies more diverse raw food options. This Biologically Appropriate Raw Food diet consists of 60-80% of raw meaty bones and 20-40% of raw fruit and vegetables. So, the BARF diet can be a good choice if you want your dog to eat his greens, too.

The second option is called the Prey Model Raw (PMR). It seems to address your dog’s instincts more than the first diet, mimicking a dog’s would-be life in nature. Because of that, it consists strictly of raw meat and no veggies. The suggested feeding plan would be:

Also, when choosing raw meat for your pet, you might need to consider your dog’s particular breed first. Some dog breeds like Frenchies and pugs have misshapen jaws that prevent them from eating raw meaty bones. If your pup doesn’t have such problems, opt for human-grade raw meat like raw lamb. You might want to avoid feeding your dog raw pet food because these items usually contain potentially harmful preservatives.

Pros and Cons of Raw Meat for Dogs 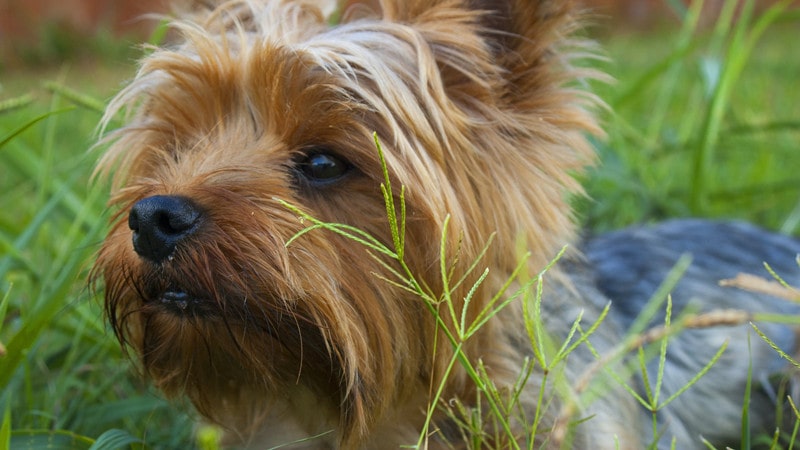 What Are the Benefits of Giving Your Dog Raw Meat?

We’ve already mentioned that a raw diet offers a nutritious source of energy for your pet dog. Raw beef, for example, has many nutrients that are beneficial for your dog’s health. This food provides your pet with enough proteins that are important for your pup’s muscles and bones. Raw beef also offers fatty acids like omega 3 that nourish your dog’s skin and fur.

Cooked meat, on the other hand, can lose some of these nutrients. Certain vitamins, fats, acids, and minerals get altered during the meat preparation process. As a result, they become less nutritious, or your dog gets them in much lower quantities. That’s why non-raw diets should always include enough supplements.

What Are the Drawbacks of a Raw Meat Diet for Dogs?

One of the cons of feeding your dog raw meat is that such food may be difficult to chew. Because it contains larger fragments of bones, not all dog breeds would be able to eat it. As you already know, dogs with fragmented jaws may even find this task impossible.

Also, giving sick dogs raw food isn’t quite recommended. As it goes, raw meat is a bigger source of bacteria than cooked meat. So, this may not be the best choice for dogs with cancer as it may lead to further health complications.

Even the owners of healthy dogs have reported cases of bowel constructions and diarrhea during raw meat diets. Some dogs even ended up developing infections and gastrointestinal inflammation. Either way, you should always check with your vet rather than experiment with your dog’s diet on your own.

How Much Raw Meat Should You Give Your Dog? 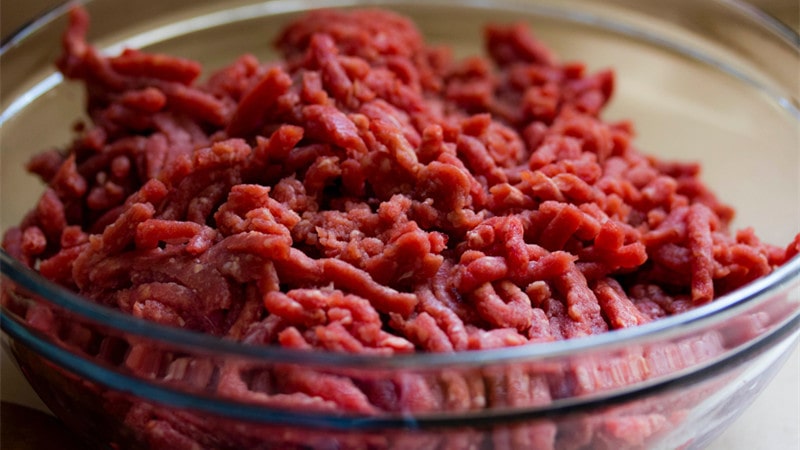 If you’ve opted for a balanced raw meat diet, you need to know how much raw food to give to your dog. As you’re about to see, this quantity depends on your dog’s age and weight. On average, you should feed your dog raw meat that reaches 2-3% of its weight. You can also split this amount of raw meat into two meals per day.

If you happen to be a puppy parent, bear in mind that young pups require more raw meat than older dogs. So, you might need to give your pup raw meat that’s up to 5% of its body weight. As before, you can split this into two or three different meals.

Also, the amount of raw meat your dog needs may depend upon your dog’s habits and its behavior. Is your pet extremely active, or does it enjoy lying around all day long? In case your dog’s inactive, it might need to lose some weight. Take its weight in pounds and multiply it by 0.02 to get how much raw food your dog should eat.

Do the same thing for a medium active dog but change the multiplier to 0.025. For an active dog that needs to gain weight, multiply the number of pounds by 0.03.

Last but not least, your dog’s diet should also be a matter of its preference. And for that reason, the answer to this question can go either way. It all comes down to your dog’s personal choice and its eating habits.

The truth is, some dogs believe they’re forming an emotional bond with their owners when eating the same food as them. Your dog might be looking up to you so much that it genuinely starts to enjoy doing everything you do. On the other hand, some dogs like to preserve their predatory nature. For that reason, they might feel more comfortable eating raw, unprocessed food that doesn’t contain any spices.

Finally, whichever diet you opt for, make sure you don’t impose it on your dog from the start. Always let your pet express its personal preference, and then combine its taste with what you think would be the healthiest solution. 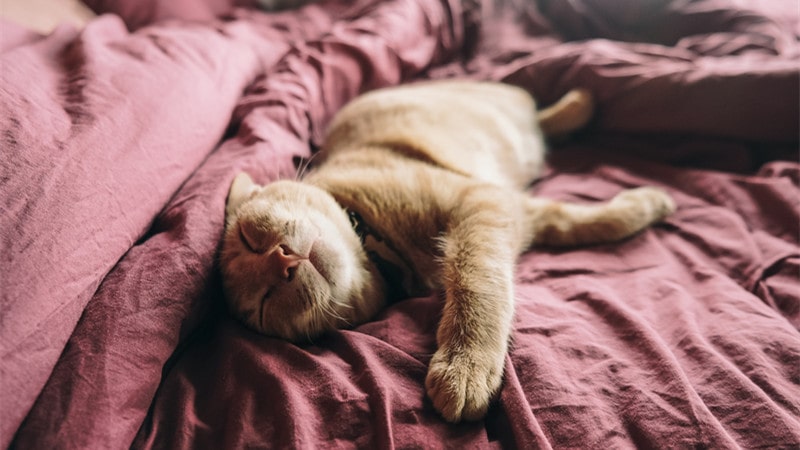 Cuddle Time: How Do Cats Choose Who to Sleep With?

Nothing beats snuggling in bed with your pet during the winter months. However, while dogs are always up for some 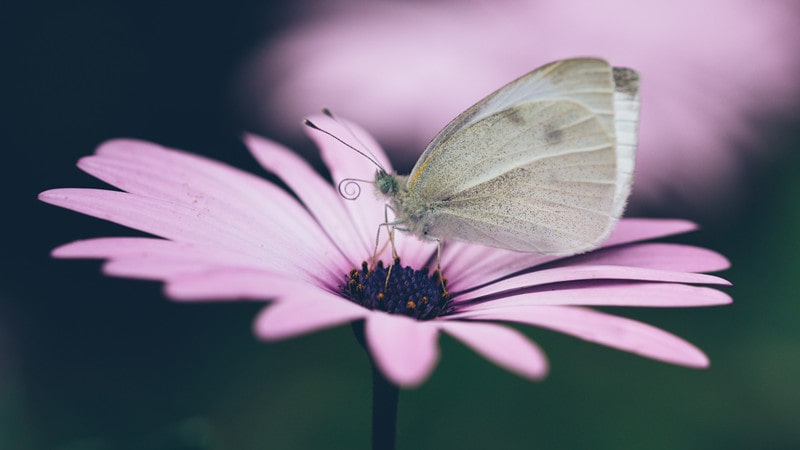 Have you spotted a white butterfly recently and wondered about the meaning of its appearance? Many people believe that this 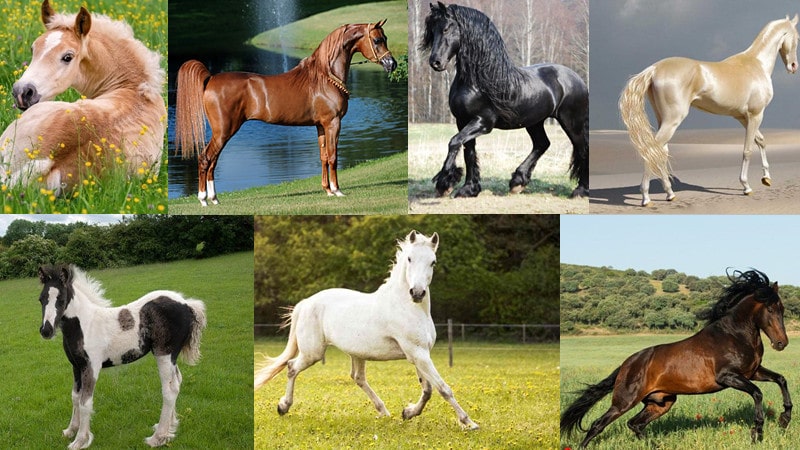 7 Pretty Horse Breeds That Will Take Your Breath Away

“There is something about the outside of a horse that is good for the inside of a man.” This famous

PrevPreviousUltimate List of Reasons for Taking Casual Leave
Next6 Best Crystals for Beginners and How to Use ThemNext
Menu
Copyright © 2022 FreeWordCentre.com All Rights Reserved.